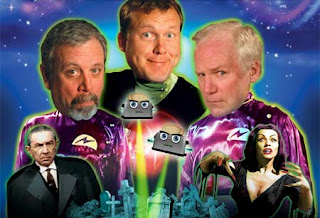 You might remember that, 2 and 1/2 months ago, I came home from watching the very first Rifftrax Live event extremely giddy and tired from laughing so hard. It really was a great show, partially because the film itself was so bad and Mike, Kevin and Bill’s comments were so on point.

I pitied those who weren’t able to go to it. Well, in limited theaters tomorrow, they’re showing an encore.

To be clear, this will not be live again. It’s a replaying of the original event. However, that still includes the hilarious music of Jonathan Coulton (who has become one of my favorite musicians as of late) and the silly “commercials” by one of the guys from Something Awful. Plus, everyone at the show will get an online code for some cool extras. And have I mentioned that the tickets are a few dollars cheaper than they were for the original showing (which is completely fair, considering it isn’t a live show anymore)?

I’m actually planning on going to the show again, it was just that funny. If you are at all a fan of Rifftrax, MST3k or all-over mirthfulness, then get yourself to the show. Your effeminate alien overlord commands it! It’s playing at 7:30 PM (in all timezones) and you can find a local theater here.