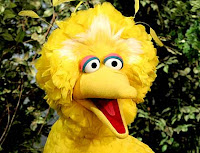 In case you haven’t heard, this week marks 40 years of the PBS staple Sesame Street.

It’s hard for me to believe that it’s turning 40, mostly because that means it was already 18 years old when I watched it as a little kid. The show is an childhood staple and has been an early positive influence in multiple generations of children in 120 countries. Sesame Street was one of my favorite shows when I was little. I still remember my life sized (well, two feet tall, which was life sized to me) stuffed Big Bird. It was easily the biggest stuffed animal I had and was one of the most comforting things in my room.

What I remember most is the first Sesame Street movie, Follow that Bird. It was easily my first favorite movie. My mom tells me that when I was a toddler, I’d just sit in front of the TV, mesmerized by the muppetness of it all. So, in honor of the show’s 40th anniversary, I’m going to review Follow that Bird (and I’ll do my best to be unbiased).

In the meantime, I give you this question: Who was your favorite Sesame Street character?