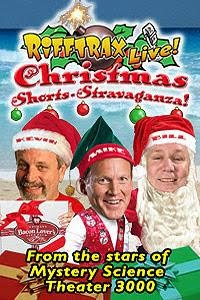 You might all know about my devoted and continuing appreciation of the night that was Rifftrax Live, the riffing of Plan 9 from Outer Space by Mike Nelson, Kevin Murphy and Bill Corbett. Add in their normal audio riffings (which make fun of and sync up with well-known movies) and you’ve got some very funny stuff.

Well, this week is going to be a little funnier. On Wednesday, they are putting on another live riff… this time, of Christmas-y shorts! While I don’t know many specifics about the short they’ll be showing, I know they’re at least doing a particularly bad Rudolph cartoon (apparently not the clay-mation one) and some retro holiday commercials. There will also be a song about the magical powers of pork (of which I concur) and a visit from bonafide famous person Weird Al Yankovic.

The live show will be shown in theaters around the country on Wedsnesday at 8 PM EST, and the taped encore will be on Thursday at 8 PM EST (the encore is slightly cheaper). No matter which night you go, if it’s even half as funny as the first Rifftrax Live, it will be well worth the price.

If that wasn’t enough for one week, the Rifftrax gang is also releasing the original Rifftrax Live dvd. I’ve been waiting for the dvd to come out since I saw the show in August, so I am thrilled. If you didn’t get to see it, I definitely suggest picking it up.

The details of the event can be found here and you can get the dvd here. And even though I’m sad I’m busy for the actual live show, if you’re in Indianapolis and going to the encore, look for me!