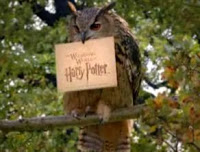 Off Screen, PotterWatch PotterWatch, The Wizarding World of Harry Potter, Theme Park 1 Comment
PotterWatch is a special group of posts on Just Plain Something dedicated to a certain film franchise about a certain teenage wizard.

Keep an eye out during the Super Bowl, Potter fans. The Wizarding World of Harry

Potter will have it’s own commercial during the big game on Sunday. But if you aren’t in the States (or just can’t wait), I was able to find the commercial online. Sure, it’s a little corny, but they actually got Daniel Radcliffe to be in it, which says something. Go ahead and watch.

After finding the video, I started looking around and found out some more details about the park. There is a shop found in the “Hogsmeade” area of the park that is a very big part of the Harry Potter stories but is actually found in Diagon Alley (which is a wizarding area of London, for those non HP fans). That shop is Ollivander’s (the wand shop where Harry gets his own wand in the first book). They’ve gotten around it by saying this is a Hogsmeade expansion, which is better than just telling fans to deal with the ret-con (and it really should be a part of the experience, even if it isn’t quite “kosher”). Plus, this way they don’t have to have a mutton-chopped John Hurt working there (although I would totally pay to see that). What I think is really fantastic about the store is that they are planning on having the clerks let the guests test out the wands… and with a wave of the wand, parts of the store will interact with the guests (similar to that scene in Sorcerer’s Stone). I am suspicious that the wand will only fit the wizard (glow and be all mystical like in the movie) when it’s the most expensive wand. How convenient, Warner Brothers! But I still admire that they’re at least trying to encourage suspension of disbelief for the guests.

Another cool area is Hogsmeade’s pub The Three Broomsticks which, along with traditional British foods, will indeed sell butterbeer. JK Rowling-approved butterbeer, to be precise. And in case you were wondering, it won’t be alcoholic (which is a little disappointing, but pretty much necessary in this situation).

In my last post about the park, I mentioned my worry about the castle itself and if it will hold up to our expectations. It obviously can’t be as big as it is in the stories, but the creative development team promises the ride inside the building will make it seem bigger than it is. And what I love is that the line for the ride will take the guests through various areas of the castle, including Dumbledore’s office (yay Fawkes!). I normally really, really hate waiting in line at theme parks, but I love that their intention is to make the interior of Hogwarts look as authentic as the exterior and that we’ll get to take time and enjoy it. Plus, they are trying to incorporate as many actual props from the films as they can, which is awesome.

If there is anything I am not really looking forward to are the other rides. One is based on Buckbeak, the hippogriff, and the other is based on Harry outsmarting the dragon in Goblet of Fire. I’m sure the rides will be fun, but it takes away from that suspension of disbelief that makes me so excited for the other aspects of the park.

There are tons of other shops in Hogsmeade which are going to have great details and cool new merchandise (which I’d love to see in person even if I can buy everything for myself). You can see some of the concept art here. I don’t know about you, but I was blown away. Here’s hoping I can make it to Orlando sometime soon.