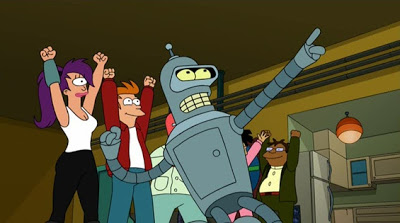 Off Screen Futurama, Off-Screen, TV, videos Leave a Comment
Off-Screen is a series of posts dedicated to things not directly related to the world of cinema, but that still intrigue me.

‘m not sure if I’ve fully expressed my love for Futurama, the once-canceled, then semi-brought back, television series from Simpsons’ creator Matt Groening and writer David X Cohen. Following the adventures of a chryogenically frozen 20th Century schmo who is thawed in the 31st century, his cyclops love interest and his friend the sassy robot (among many other fantastic characters), Futurama is one of my favorite shows and is considered by me to be one of the smartest comedies of the last decade. Because of fan support (in particular, the buying of dvds and watching reruns on Adult Swim), Fox ordered four straight-to-DVD movies (which I might have to review in the next month or so). And because God is a gracious and loving God, a brand new season is coming to Comedy Central more than ten years since the series premiered.

While we still have until June 24th to get our shiny metal fix, the good people at Futurama created this little trailer to feed us until then. A quick warning: it does give away what happens immediately after the fourth and final movie.