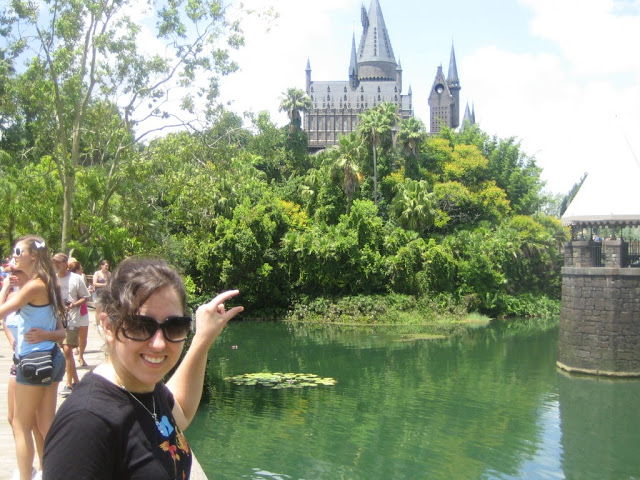 Off Screen, PotterWatch Butterbeer, Herbology, Hogwarts Castle, Mirror of Erised, PotterWatch, Wizarding World of Harry Potter 3 Comments
PotterWatch is a special group of posts on Just Plain Something dedicated to a certain film franchise about a certain teenage wizard.

A week ago, I got to go to the Wizarding World of Harry Potter, the homage to Hogwarts within Universal Studios in Orlando, Florida. Because I know so many of my readers are huge HP fans, I made sure to take tons of photos to post on Just Plain Something. While I will be posting a bunch of pictures in the next three posts (yes, it will take that many posts to get through it all!), let me assure you that I won’t be able to share everything from the park with you. There will be plenty for you to discover for yourselves when you make it down to Florida. This is just a taste of what you’ll be able to experience.

It was about 95 degree Fahrenheit out that day… the snow didn’t fool anyone.

The truth about Hogwarts’ secret location… it’s right next to Jurassic Park!

We were ready to go to Hogwarts!

Even though it was much smaller than “the real castle”, it was still so cool to look at while in line.

It might be a model, but it’s a pretty breathtaking model.

So here is my very first taste of Butterbeer. It’s one of the things I was looking forward to the most. But I have to say… it was really, really sugary. I mean, it was like drinking butterscotch. It still tasted good, but I could only drink about half of it before I was sick of it. I suggest getting one to experience it, but share with a friend. And keep drinking water.

Before you get into the ride within Hogwarts, you go through different parts of the castle. The first part of the line is in the dungeon area of the castle. There are lots of things to see down there, including the Mirror of Erised. In case you were wondering, my deepest desire was apparently standing in a long line surrounded by sweaty tourists.

You can almost hear Alan Rickman taking points from Gryffondor.

So, what happened to tickling the pear?

Our first view of Herbology class.

We’re pretty sure this is where the actual ride takes place.

Hogwarts’ Architect. A copy of the statue from the movies.

Salazaar Slytherin, looking cheery. We also see his portrait down the hall… and he’s not too pleased to see muggles in his school.

Some of the portraits. The one on the bottom right moved, which is why you can’t see it.

The Pensieve (Goblet of Fire version)

Above you can see Dumbledore’s office. It’s a bit hard to see in the photo, but Dumbledore (still played by Michael Gambon) welcomes you, the first muggles to ever come to Hogwarts and warns you of the dangers within the castle. He is LCD, projected on a screen behind his desk, and while it’s obvious Dumbledore isn’t actually in the room, it’s far better than animatronics.

Similar to Dumbledore’s office, the Defense against the Dark Arts classroom features Ron, Harry and Hermoine greeting you. They want you to ditch the ghostly boring Professor Biggs’ lecture coming up (although Hermoine swears that it’s actually fascinating) to go see a Quidditch match.

Ron made it snow.

The Gryffindor Message Board.

Bee in your bonnet, Potter?
After this, you go to the Room of Requirement, where you get into a four-person chair lift and go on the ride. I won’t give away too much, but it was an awesome ride. You really do feel like you’re flying with Harry. I’m not kidding, it felt very real. Almost immediately, I heard Hagrid shouting, “Has anyone seen the dragon?” and my stomach cringed. You do go through some of the scarier moments of the films. I am not afraid to admit I closed my eyes at a few moments. Perhaps the funniest moment is when you get to the Quidditch field. Malfoy taunts Harry about needing to bring along his “muggle fans”… I kind of wanted to shout, “Damn right!” When the ride ended, I just wished it was a little longer.

So, that’s all for Part 1 of my trip to Hogwarts.