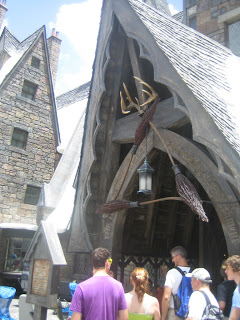 Off Screen, PotterWatch Honeyduke's, PotterWatch, The Three Broomsticks, Theme Park, Wizarding World of Harry Potter, Zonko's 1 Comment
PotterWatch is a special group of posts on Just Plain Something dedicated to a certain film franchise about a certain teenage wizard.

A week ago, I got to go to the Wizarding World of Harry Potter, the homage to Hogwarts within Universal Studios in Orlando, Florida. Because I know so many of my readers are huge HP fans, I made sure to take tons of photos to post on Just Plain Something. While I will be posting a bunch of pictures from the 2nd part of the trip, let me assure you that I won’t be able to share everything from the park with you. There will be plenty for you to discover for yourselves when you make it down to Florida. This is just a taste of what you’ll be able to experience.

Speaking of taste, we were pretty hungry after going through Hogwarts. Where better to get a bite to eat in Hogsmeade than The Three Broomsticks?

So, why do they call it The Three Broomsticks? …Oh, right.

This is pretty much how packed it is all the time.


Considering this is the only place in “Hogsmeade” to sit down and eat (and there were literally hundreds and hundreds of people just in the Harry Potter part of Universal alone), I was surprised that we were able to get through the line and sit down without feeling way too crowded. Mike had fish and chips (which were surprisingly crispy considering how many they have to dish out every hour) and I had a decent shepard’s pie.

The view from our table.

What was above our heads.

Mike enjoyed the Hog’s Head Brew. He thought it was similar to Killian’s. Along with water, I had pumpkin juice, which I can say was much more appealing than the butterbeer. It’s mulled and reminded me of chilled apple cider (which I love). The pumpkin was mild and not super sweet, so as long as you aren’t completely adverse to the taste of pumpkin pie, you’ll like this.

The hog’s head at the Hog’s Head would occasionally move and grunt.

After lunch, we decided to check out a couple of the shops. So, we needed some more cash!

Even the ATMs were magical. And you don’t have to deal with Goblins glaring at you!
One of the nice things about the shops is that some are connected to each other… so you only have to stand in one line and can easily walk into the connecting store after you are done with the first.

The window at Honeydukes.

Oh, I see what you did there…

Of course, I couldn’t leave without getting some treats and tricks. So, this is what I got from Honeyduke’s and Zonko’s.

Just one of the candies from the book, but not the movie!

Another great buy straight from the books!

It comes with a glove. Safety first!

I have to admit… the detail on the box is awesome.

So, the chocolate frog melted a little, but just the face. Compare the size to an M&M.

Ron was right… you buy the chocolate frogs for the cards. They’re holograms, which is why this photo looks so weird.

Turns out Helga Hufflepuff was known for her cooking. That explains her legendary object being a drinking cup and her house’s common room situated right by the kitchens.
While they do have other really awesome toys and candy at the shops, there were a few really great things that sold out for the day by the time we got there (including pygmy puffs and puking pastilles). It’s amazing to think how quickly they run through merchandise there and I wish I could have seen that stuff. Now, I also got a chocolate wand for my brother’s girlfriend (who’s also a HP fan), but it melted before we even left Universal (luckily, I bought an extra Sugar Quill for her just in case). Moral of the story: try to buy chocolate from Honeyduke’s toward the end of your visit.

So, we’re almost done with our adventure to Harry Potter’s world. The last chapter includes more thrills, most sights and just a hint of child-like wonder. Stay tuned!