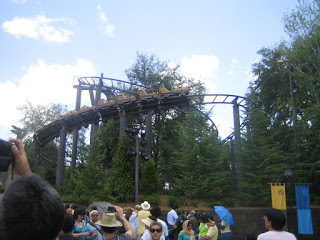 A week ago, I got to go to the Wizarding World of Harry Potter, the homage to Hogwarts within Universal Studios in Orlando, Florida. Because I know so many of my readers are huge HP fans, I made sure to take tons of photos to post on Just Plain Something. While I will be posting a bunch of pictures from the final part of the trip, let me assure you that I won’t be able to share everything from the park with you. There will be plenty for you to discover for yourselves when you make it down to Florida. This is just a taste of what you’ll be able to experience.

This is what a hippogriff looks like. Apparently. This is also the one ride we did not go on. We meant to, but then we ran out of time. But we got to hear Hagrid explain to the riders how to approach a hippogriff with the least likelihood of being maimed. But we did go on the Dueling Dragon ride.

On the way to the Dragon coaster, Mr. Weasley’s car kept honking at us!

Because it’s based on the dragon scene from Goblet of Fire, there are plenty of Tri-Wizard Tournament stuff around the walkway to the ride. But what’s missing?

That’s right! There’s no Cedric Diggory stuff! Even inside, you could see only three of the silver dragon eggs, not four. I really wondered why they didn’t put him in (unless this is Twillight backlash).

Let’s just all pretend we don’t see the strings…
Then we had to choose:

Chinese Fireball (cue Barty Crouch’s impersonation of a ghost)
We chose the Fireball, mostly because we figured the majority of people would crowd to get on the Horntail. Right before we got on the ride, we were led into a room that was very similar to the tent in GOF. If you looked up at the ceiling, you could see the dragons’ shadows moving occasionally. And the ride itself was really fun. Granted, it’s a re-purposed ride for whatever was in that spot previously (Mike thinks he heard it was another dragon-themed roller coaster anyway), but it was still really fun to ride. It might sound dorky of me, but I just imagined I was flying.

So, after the roller coaster, we checked out the other stores. Understand, while the town looks vast in the picture above, most of the buildings are just for show. They have some awesome stuff in the window to look at, but you can’t go in. You also have to understand that everything has a long line. This includes all the shops. And the line for Ollivander’s/the Owl Post (like Honeyduke’s/Zonkos, the two stores are connected) is almost as long as the line for Hogwarts. And unlike the line for the castle, Ollivander’s line is all outdoors. Even with the awesome stuff to look at in the “shop” windows, I was worn out from that line.

I think this was around the time the teenagers behind us in line were getting really annoying.

By the way, I don’t know if you noticed my shirt, but it was one I brought to Florida deliberately for Universal. It’s my recycled phoenix shirt (accessorized by my owl charm necklace). I got compliments from three different park employees for that shirt. It made me very proud.

When you need balls…

This is the video I took of the Quidditch store. We never did see where the snitch went.

The bookstore… I wonder what they’re featuring in the window….

Yes, only his books are in the window. He sure did love alliteration.

After more than an hour… finally!

I don’t think the “wandmaker” realized I was going to take a picture of him. He looked right at me I just grinned. While it was an exhausting wait in line, it was really well worth it. He chose a little boy in the front to come forward. He gave the boy a wand and asked him to light the wand using Lumos. Instead, we started hearing thunder and rain. The wandmaker gave him another wand and ask him to use Aguamenti to water a potted plant in the corner. The plant wilted. The wandmaker finally handed him a wand and, just like the movie, a glow came over the kid and some mystical music played. The wandmaker told him what his wand is made of and its core (although all wands are actually composed of man-made materials, thanks to Rowling’s wishes) and tells him that owning a wand is a large responsibility. He ended by warning him to never, ever…. put his wand in his back pocket. Wand safety, don’t you know. Anyway, the kid had just so much joy in his face, it was a very magical moment (even though I was secretly hoping there were no kids in our group so I had a better chance of getting chosen).

After that, we were motioned into the next room where the rest of us could choose from one of a dozen or so wands (some of them replicas from the movies). We didn’t get any, mostly because you can get much cooler ones online from Alivan’s online. And so you know, all of the wands are $30, which isn’t that bad considering what they could have charged. And if you’re a parent, understand that if you go into Ollivanders and your kid is chosen to participate, you don’t have to buy the wand for him or her, but come on.

After that, we moved into the Owl Post, which also had tons more souvenirs.

“I wanna take pictures of the owls!”= words that came out of my 24 year-old boyfriend’s mouth.

A boy went up to it and the book suddenly started to flail around. Scared the crap out of the kid.

I got a Gryffindor t-shirt and some postcards at the store (you can send postcards through the “owl post” there, but the stamp prices are murder). However, perhaps my absolute favorite souvenir is below.

I’ve already had fun throwing it around. I don’t care that I’m in my mid-twenties, it’s still so cool!

So after getting another water (which were the same price but smaller than those in the other parts of Universal… the vendor claimed *in a faux British accent* that they only have small bottles in the wizarding world), we walked around some of the other faux shops as we moved towards the exit.

So, we know where Hermoine bought it.

Musical instruments played themselves in the top left window.

So, as we looked one last time at the Hogwarts Express, Mike and I said farewell to Hogsmeade. And tried to forget how much we spent in those few hours. Even though the crowds were close to unbearable (even for a theme park) and I seriously got tired of the movies’ various soundtracks by the end of the day, it’s definitely worth any HP fan to go at least once.