Home  /  Off Screen  /  The Craziest Crossover Ever 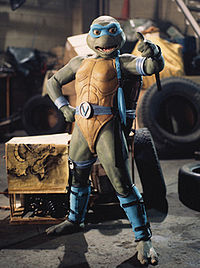 I will admit it: I watched the Power Rangers when I was a kid. I was also a big fan of the Ninja Turtles, the movies and the cartoon. But by the time both series got into their later iterations, I wasn’t watching them as much. Which is probably a good thing. Just… just look at this video.

OK, first and foremost, I need to address what might be the most horrific abomination in this video. Namely, the presence of Venus, the fifth ninja turtle. It was bad enough that they added a fifth ninja turtle. The first thing I said when I watched the video was, “Wait, did I just see five? No, that can’t be right… oh my GOD, I just counted five!” But that wasn’t as bad as seeing how creepy the design of Venus is. Look at this picture, courtesy of Wikipedia:

Why does she have the body of Dara Torres?

Ugh, it’s hard to even look that that picture. It’s so very furry-friendly. It might be worse that Alicia Silverstone’s Batgirl suit. I also have a big problem with her name. The rest of the turtles were named after legendary artists… and she is named after a picture, the work of a male artist. Couldn’t they have found a good female artist to name her after? Maybe Frida?

The other thing that really bothered me is that the Power Rangers exclaimed, “OMG, it’s the Ninja Turtles!” If the Turtles are supposed to be a secret within New York, how the heck do the Power Rangers know about them? This will probably only matter to my fellow 20-somethings who grew up with the movies and cartoon, but it just bugged me.

For those of you who grew up with the original shows, did you cringe as much as I did? Do you think there could have been a way to make a good crossover of these two series?