Home  /  Off Screen  /  Captain Tightpants on The Venture Brothers 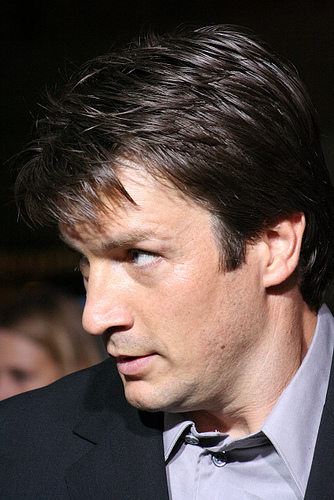 Last night saw the start of the 2nd half of the Venture Brother’s 4th season. Fans have been waiting for months for the rest of the season to come out and it didn’t disappoint. VB creator, writer, director and actor Jackson Publick wrote on his blog yesterday about the new episode release. He also wrote about Nathan Fillion guest starring later in the season. Fellow geeks, I repeat, NATHAN FILLION IS GUEST STARRING ON THE VENTURE BROTHERS! He aims to misbehave.

This has been verified by Fillion himself. Needless to say, I am pleased as punch to have Captain Hammer in one of my favorite cartoons. Since the Astro Base used Batman voice actor Kevin Conroy as the emotionally fractured Captain Sunshine early in the 4th season, I’m curious to see what character they pair with Fillion’s rugged and alpha-male voice. Perhaps Brock’s long-lost brother? Or maybe space pirate?

Today is also my boyfriend’s and my 5 year anniversary. Because I’m such a fangirl, his gift to me was appropriate.