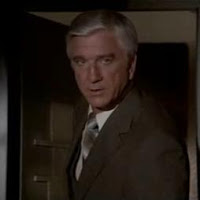 It broke my heart to find out that Leslie Nielsen passed away tonight at the age of 84. With Barbara Billingsley and Peter Graves, this makes the 3rd loss from the amazing cast of Airplane! this year.

I’m not sure any comedy has influenced my sense of humor the way Airplane! did when I was a kid, but easily the best part of that film was Nielsen’s amazing and effortless performance as Dr. Rumack. It’s so good, I think most people forget that he doesn’t show up until halfway through the film. It’s even more amazing that, until Airplane!, Nielsen’s career had comprised of solely dramatic roles, particularly villians. What could have been the end of his career became his metamorphosis from character actor to comedic legend.

Granted, Airplane! was his best work (surely you don’t deny it), but he was in so many great, silly movies following it. Most of you are thinking of the Naked Gun films, but let us not forget the greatness that is Surf Ninjas. And let us not forget his actually understated role as Santa in All I Want for Christmas.

I felt it only right to post easily one of the funniest bits from Airplane!. True fact: when we flew to Florida this summer, boyfriend Mike had this idea for a prank. As we were walking off the plane and the pilot thanked us for flying with them, Mike earnestly, word-for-word, said this line and immediately walked away before seeing the man’s reaction:

Rest in peace, Leslie. And I’m sorry for calling you Shirley.