Home  /  Off Screen  /  The OTHER Spiderman Musical 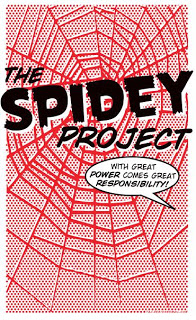 You’ve probably already heard about Spiderman: Turn Off the Dark. If the poorly chosen title tells you anything, this is not a very good representation of what has made the web-slinger a pop culture (and even literary) icon.

A bloated and multiple casualty inducing multimillion dollar mess, Spiderman: Turn Off the Dark is a sad reflection of Broadway gone bad. Some would suggest that superhero stories can’t be translated onto the stage and still be entertaining. Others would prove the naysayers wrong. Those others would be Justin Moran and the People’s Improv Theater, the brave souls behind The Spidey Project.

Running at just about an hour long, The Spidey Project tells the story of Peter Parker, a normal teenager in New York who pines for Gwen Stacey and is just starting an internship with The Daily Bugle. At his first official assignment – taking pictures for the science expo – a radioactive spider bite causes Peter to gain incredible superpowers. Yeah, I know it sounds like the standard Spiderman story, but it also has songs about the horrors of midterms, Uncle Ben explaining far too much about his love life (“When your Aunt May and I make love…”) and popular jock Flash seducing Gwen with the sultry, delicious melody of… Chipotle. Yep, it’s a comedy, but it’s a comedy that still manages to be a fine homage to its source material.

In one short hour, they were able to bring us a great superhero story with catchy-as-hell music and more than enough tongue-in-cheek humor. What I loved most of all were the characters! Betty Brant – played in the movies by the lovely looking Elizabeth Banks – is made into a Moaning Myrtle-like lovesick puppy (“Oh! Your face is really symmetrical!”) thanks to Claire Neumann. Robin Rothman is so subtly funny as Aunt May, with her pronunciation of “Maj-Jong

” making me laugh far too much for my own good. While all the actors were just spot-on (Travis Nilan had a great voice for Peter), my absolute favorite was Louie Pearlman as J. Jonah Jameson, Peter’s boss. His on-cue rants about the glory days of publishing before feminism and anti-drug programs were just so on point for the character. Immediately slapping Peter to make sure he wouldn’t cry was just so great.

The really amazing thing about this production is what they were able to do in such a short amount of time! From inception to release, they only had a month (yet still opened before the other Spiderman musical). They also had a budget of literally zero dollars. I absolutely loved how they were able to use the most minimal of props and sets to their advantage – I’m pretty sure their cool choreographed webslinging would outshine the hightech version from the other musical any day. Every aspect of the show was on a voluntary basis, which meant that everyone who came on board were involved simply because they wanted to make an amazing production. According to the playbill, “Along with a reduced time-frame and no money, we have also had no injuries, no actors quitting, no lawsuits (we hope), no creative restaffing, and no delays to our opening.” And in my humble opinion, they made a great show to boot.

The Spidey Project only had two performances (all in one night), but thanks to the internet gods, we can all see the production on youtube, starting with the video below. WARNING: there’s a good chance the songs will stick with you, but in a good way!


If you want to know more about the project, I suggest checking out thespideyproject.blogspot.com. I’m looking forward to more projects from them posted online soon!