Home  /  Off Screen  /  A (Team) Venture in Radio Theatre with Jengajam 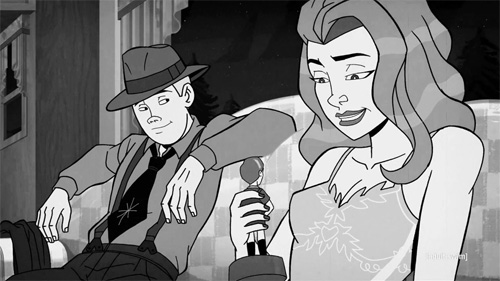 Some of you know that I’m a cartoon fan. Some others know that I review The Venture Bros. for CliqueClack. I’m a bit of a fan of the Astrobase Go! team. So, when my friend Jack told me he would be overseeing a Venture Bros. radio show-like read-through of the episode “Everybody Comes to Hank’s” for Late Night Jengajam, I didn’t hesitate taking up his offer to be a part of it. We recorded it live on Tuesday, and I’m happy to say that it went pretty well besides a couple technical hiccups.

If you couldn’t tell, I played Morpheus, Dermott and Dermott’s … sister, Nikki. It took me a while to get Orpheus right, but I think the incantation scene ended up rather fantastic. It’s always a good sign when your fellow actors can’t stifle their giggling. Oh, everyone else was pretty fantastic in their voices, especially Jack as Hank and my friend’s husband Chris as Sergeant Hatred (actually, his wife Mary was also great as Billy Quizboy). All in all, it was a really fun night and I hope you Team Venture fans enjoy it as much as I enjoyed being a part of it.