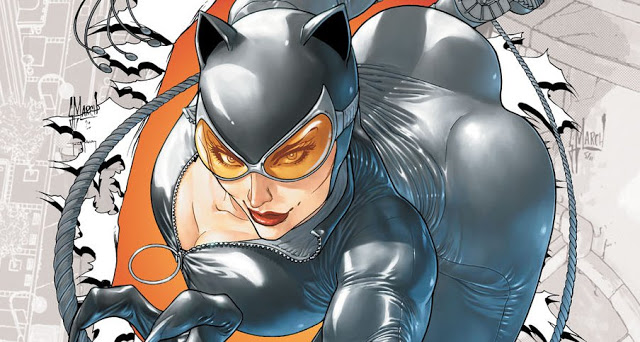 I think about 70% of the social media content I was engaging in today had to do with feminist issues. There was more discussion on the ridiculous broken Catwoman (and the awesome parodies that have occurred since the cover went online) and the article on booth babes at E3 and a general discussion on how women are treated across the board in western culture. It gave me a lot to think about to be sure. And there was a very well written post by Sue from the blog DC Women Kicking Ass that focused on why DC (and comic book developers in general) need to stop falling back on objectifying their female characters if they want to stay in business:

I suspect a lot of women are going to see The Dark Knight Rises. I suspect that a lot of people who have never read a comic book may see The Dark Knight Rises. […] This cover risks anyone not already reading Catwoman looking at that
contorted body and a giant half-ass and say, “Yeah, I’ll pass.” It risks
people who after seeing the movie may have looked at picking up the a
zero issue as an starting point as a new reader looking at the cover and
saying, “WTF?”. It blows an opportunity for more money.

And that made me think about why, despite loving superheroes growing up, I never got into the comics themselves.

To be clear, one of the simple reasons I didn’t read comic books as a kid was that I didn’t have easy access to them. The few homes I lived in growing up were either in the suburbs or in farmland, so I couldn’t have ridden my bike to the comic book store even if there was one in my town … which there wasn’t. I also was (and still am) a little intimidated by the massive archive and history of the comics that I would be jumping into (I mention both of these reasons because I want to make sure you understand why I didn’t necessarily try out comics before the story I’m about to tell happened).

But outside from those two factors, there really shouldn’t have been a reason that I didn’t want to read comics. I’m a cartoon girl at heart (hence the cartoon column) and three of my absolute favorite cartoons were and still are the 90s Batman, Spider-Man and X-Men cartoons. They each had great characters, including some awesome female characters of varying levels of sexy sassiness. Catwoman, Black Cat and Rogue were all very sexy for kid’s television, but they were still strong characters who were more than just their curves. At the age of 7, I saw these characters for the first time and didn’t see them as intimidating in their shows … I just thought they were cool.

Jump to 6th grade. I was a very lonely kid who had already started to pull away from her quirky personality when she was in class and just in general. During a free period, a bunch of boys were looking at one of the boy’s comic binder. I heard one of them mention Black Cat, and I got excited. “I know that character, she’s great!” I thought. I asked them if I could see it and the boy (confused I was even talking to them) showed me a picture of Black Cat with her costume zipped down to her navel and rock-hard cleavage that looked like the fakest plastic surgery. And then I realized the boys were just ogling her and she didn’t even look like herself and why was she posing like a Playboy Bunny? And then I saw Rogue – my favorite X-Man – and she had a similar pose that just didn’t seem like her, with a zipped down costume and plastic breasts. And I just walked away, regretting I even tried talking to them.

And while I didn’t realize it until years later, in that moment comics became a boy’s club to me. I still watched the cartoons with a passion, but I never bought comics, I never kept up with the comic stories and I missed out on some great stuff (including actually really well-written female characters) because in my mind it was made clear at 12 years old that I wasn’t welcome. I only started going to the comic book store near me when I was well into my 20s and even now I stick to the superhero books I know for sure I’ll like because I don’t want to have to see my favorite characters made into soulless blowup dolls on paper.

Do all female nerds have this experience? No, because we’re all very different people with different experiences … shocking! But the truth is that I was the prime target for comic books – I already loved the characters and I was a voracious reader. Despite not living near a comic book shop, all they had to do was not alienate me and they could have had a cash-paying customer for my entire adolescence. Print is dying and it doesn’t pay to alienate a huge portion of your fanbase and your potential fanbase. These days DC has some awesome cartoons featured on Cartoon Network with devoted fanbases full of young women. Welcome them.