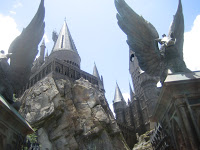 Ah, PotterWatch… it’s been too long, my love.

Oh, I’m sorry. I… forgot where I was for a moment. Anyway, as we anticipate the release of Deathly Hallows pt. 2, the filmmakers are keeping a tight lid on the final film, even pulling a leaked photo off the web. However, we have found out that there’s a good possibility the Wizarding World of Harry Potter will be getting an expansion.

Devoted readers will recall that I have already made the trip to the HP amusement park over the summer. It was very cool, but there was plenty they could have done more of. The fact that they’re suggesting making a new addition with Diagon Alley (including Gringotts) probably means other visitors have said the same thing. Considering Gringotts has that awesome mining cart system – that’s going to be shown vividly in the last film, no less – there should be an awesome ride in the making for that building. I also think it will be a great opportunity to open another restaurant (there’s only one and it’s always crowded!) and more cool stores. I am wondering if they’re going to have the original Ollivanders’ in the new addition, since they already have the “Hogsmeades” branch of the business. If they do get John Hurt to just stand in the store and wave, I will be happy.

Of course, these are all just rumors at the moment, but I’m sure there will be some sort of expansion. Whether any of the additions suggested will be in it is anyone’s guess. That being said, if some major expansions are made, I might have to go down to Orlando in the next few years and do another special PotterWatch on the changes!