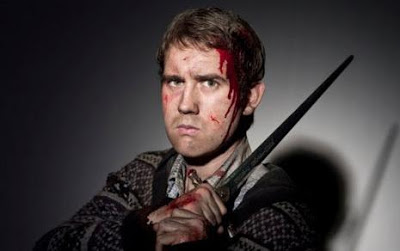 PotterWatch Deathly Hallows, Harry Potter, Magic is Might, Matt Lewis, Mudbloods and the Dangers They Pose, Neville Longbottom, photos, PotterWatch, propaganda 3 Comments
PotterWatch is a special group of posts on Just Plain Something dedicated to a certain film franchise about a certain teenage wizard.

25 is a big number. If PotterWatch was a person, it would be out of college and desperately trying to make ends meet while blogging about pop culture. Have I mentioned I was born in the fall of 1985? Anyway, we’ve brought some fun news to go along with my 25th PotterWatch.

First of all, a promotional image for Deathly Hallows pt. 2 has been released online. As you can see below, it’s of Neville (Matt Lewis) holding the Sword of Gryffindor.

I will say, he’s pouting just a tad too much, but I’m still so excited to see Neville fighting “the man”. His transformation from nervous wallflower to bad ass leader is in the background of the last

(and the movies so far), but he shines in the last few chapters of Deathly Hallows. I can’t wait to see that come to life of the big screen.

The other cool news is that an interactive website has gone up called “Magic is Might.” It’s a faux news site from the Voldemort-controlled Ministry of Magic POV. It started just a few days ago as if it was the beginning of Deathly Hallows. There’s a lot of anti-muggle propoganda already, and it’s cool to see how certain events were played up or played down. My favorite so far is the “businessman” who was attacked by a house-elf… I’m pretty sure that was Mundungus Fletcher getting nabbed by Kreacher. Also, the dates being set for 1997 is a nice touch.

The other great touch to this site is a PDF of Dolores Umbridge’s Mudbloods & the Dangers They Pose. What I love about the Magic is Might site is that it strengthens my belief that the Ministry in the 7th book represents Nazi-controlled Germany. My oma was a girl during WWII in Germany and the stories she would tell me of the government propaganda her parents urged her to ignore remind me so much of this website. Anyway, I love how a project like this can just create a deeper fictional universe.

Deathly Hallows pt. 2 comes out July 15th. Who else is excited?