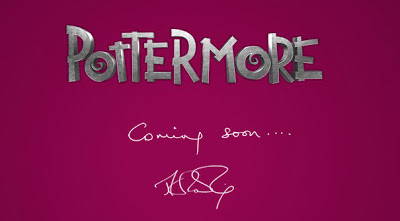 Back in the spring, Pottermore.com posted this simple picture on the front page.

Yeah, don’t leave us hanging or anything, Rowling! There was so much speculation on what it could be, but personally I was hoping it was the Lily/James prequel novel I’ve been wanting since finishing Deathly Hallows. Well, about a week ago we got this very sweet video from Jo herself.


Considering before I actually saw the video I heard the rumor Rowling was starting a Harry Potter MMO, I’m very pleased that it’s not just going to be an online game. According to The Guardian, Rowling doesn’t plan to write anymore novels, but will be releasing new details from the Harry Potter universe for free on the new site:

From Professor McGonagall’s love for a Muggle as a young woman, to how the Dursleys met (Petunia was working in an office); from new information about Slytherin, Ravenclaw and Hufflepuff houses, to details about wand wood, Rowling’s writing will be just one part of the […] website.

If I had my way (which happens far less than it should), Rowling would write a trilogy following Lily, Snape and the Marauders’ time at Hogwarts. I really want to see Lily and James’ transition from frustrating hate/love relationship to just (mostly) love. Sure, we might still get to read about them on the Pottermore site, but I still want to see Rowling change her mind and start writing more novels.

So, what other stories would I love to see? The years between the end of Deathly Hallows and the epilogue would be great. Those of us more curious than others have already learned some details about Harry’s life after Hogwarts, thanks to interviews with Rowling since DH‘s release. Still, how great would it be to learn more? For instance, we’ve been told that Harry does in fact becomes an Auror as an adult, but I would love to read about him in action. I’d also love to learn more details about the wizarding world in general. For instance, how many wizards are there in England? How many students go to Hogwarts? Do any of the professors have spouses, and how does that work with them living in the school? What is a day like in the life of a Hogwarts headmaster?

And while I know it’s getting into fan-fic territory, how great would it be to see the next generation more? Teddy and Victoire’s relationship, the friendships between the Weasley/Potter cousins, etc. And I personally want to know more about Neville’s life as a Hogwarts professor after being a complete badass during the Battle of Hogwarts.

The possibilities for content are endless, and I am very excited about that. The game aspect to the site is just a bonus to me.

And remember, just under two weeks until the final Harry Potter movie premieres!