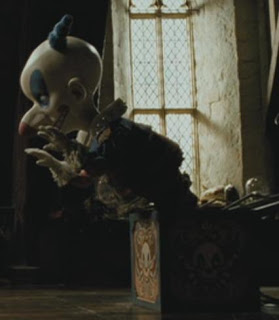 Oh PotterWatch… it’s been too long. With Deathly Hallows pt. 2 out for over a month, there just hasn’t been as much to cover in the world of Harry Potter, has there? Luckily Daniel Radcliffe has a new movie coming out! I don’t think he’s a wizard in it, but there are ghosts! Maybe Peeves will make his big-screen debut after all!

So, the first thing I noticed in the trailer was the creepy “little girl reciting a hellbent nursery rhyme” voice over. This is scary movie clique number one, especially since we then see some creepy girls playing and looking towards the camera. Plus, this is the second Radcliffe movie that features creepy 1800s toys that weren’t originally meant to be scary. See:

Honestly, who ever thought that kids want to play with creepy laughing monkeys and clowns? Were 19th century parents trying to emotionally scar their children for life? Even without the toys in The Woman in Black being possessed by a sinister lady ghost, those toys are completely frightening.

But besides the satanic toys and children that would get along swimmingly with the twins from The Shining, there’s one other thing that stands out in this trailer… that would be Daniel Radcliffe’s sweet, sweet sideburns. Check out that industrial age action!

Yep, pretty damn awesome. Sure, I’m interested in seeing HarryI mean Daniel play a new character, but at this point I’m just really loving the costuming and hairstyle. Even if the movie sucks, those sideburns rock.

Oh, and one other thing. Did anyone else find it odd that there was a Twitter hashtag for the movie at the end of the trailer? I get having a website for the movie, but when we’re talking about a story set over 100 years ago, having the trailer mention Twitter kind of breaks the tension, doesn’t it?