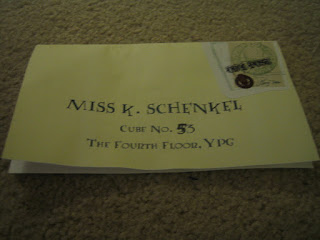 You know, December can be a crazy time.You’re busy, you’re trying to stay ahead of the game with present shopping, you’re making plans for the holidays, and even when you’re out of school, there’s that sense that there’s a break coming, even if it’s just a handful of days. And that childlike spirit has been seeping into my workplace.

Today we started our Secret Santa at work. I was honestly expecting something like candy canes or maybe some kind of ornament. Instead I got a note:

I smiled at the obvious Potter reference. I especially liked the HP stickers and the K. Schenkel ala H. Potter. But then … I opened the letter.

And then I saw what came with the letter.

That’s right, readers. This wasn’t just a Harry Potter secret santa gift. This was a “A Very Potter Musical” Secret Santa Gift. OK, techinically it’s a “Very Potter Sequel” gift, but you get what I mean. I was more or less speechless by the specific nerdery radiating from the gift.

Before our names were drawn, we handed in an info paper that said a little bit about ourselves. I know I mentioned this blog and I’m pretty sure I put down that I’m a HP fan (along with a few other of my favorite shows and movie), but what really makes me impressed is that:

I mean, I showed my gift to a handful of HP fan coworkers and they were all shocked to discover that AVPM exists. I am just thoroughly impressed that my Secret Santa took my gift to a nerd level unseen by most office buildings.

Now, I still don’t know who my Secret Santa is (although I have an guess). I still have two more gifts to receive before it will all be revealed … I hope the other gifts are just as nerdy and awesome.