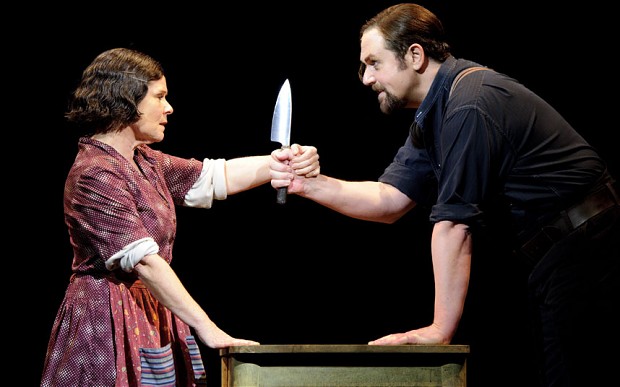 She’s an ambitious, under appreciated woman whose good at putting on a smile and doesn’t mind hurting children if it will help the man in her life. Am I talking about Professor Umbridge of the Harry Potter series or Mrs. Lovett of Sweeney Todd? Well, Imelda Staunton has taken on both crazy characters now. While Sweeney Todd is a far bloodier story in regard to gore alone, it’s amazing how hilarious Mrs. Lovett is compared to Professor Umbridge. You cheer for Lovett is her plan to put her would-be-love’s murdering to good use, but you glare with rage at Umbridge when she’s only administering corporeal punishment to her students. Don’t get me wrong, what Umbridge does is infuriating and sick, but it’s still quite a few notches below cooking human flesh. Oh and spoilers, Mrs. Lovett cooks people. In case you didn’t know.
It kills me when I discover live theater that I can’t enjoy in person because it’s an ocean away. Last summer it was Much Ado About Nothing featuring Doctor Who dynamic duo Catherine Tate and David Tennant. Now it’s Imogen “Sadistic Dolores Umbridge” Staunton as the cannibalistic entrepreneur Mrs. Lovett. The production has gotten rave reviews since it premiered West End back in the Fall. The critics even love the setting transfer from the 1800s to the 1930s, which fits well considering the practically hopeless sinking into poverty covering so much of the world during that time.

The show will be at the Adelphi Theatre in the Strand, London, until September 22nd (my birthday, no less!). I’m sure the ticket prices are insane, but if you are in London and can make the show, I’d highly suggest it especially if you’re a Potter fan. If you’re stateside like me, you can still enjoy two excellent song from Staunton so blissfully in character – the first song just happens to be my favorite in the entire show.