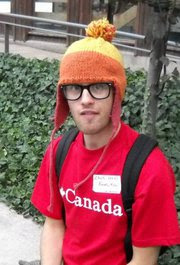 Uncategorized Chris O'Brien, Citation Needed, guest comic, Guest Reviews, Knives_Kill, The Green Hornet 2 Comments
This is the second in a series of guest reviews by fellow writers and film lovers. Chris O’Brien AKA Knives_Kill is one half of the duo behind the super popular webcomic  [citation_needed]. If you haven’t read it yet, I highly suggest going over there because it’s delightful. I contributed a guest comic of my own back in August and Chris was kind enough to repay the favor with his own take on The Green Hornet.
The Green Hornet: A Movie Review by Christopher O’Brien
(Correction – A Drunk movie review by Christopher O’Brien)

“Batman, Ironman, Bond, Seth Rogen.” There’s no way a combination like this could go wrong, right? Yes and no. How do I begin a review of a movie such as this? I have never written a movie review before and to be quite honest, I have no idea what I’m doing right now. The statement above isn’t a joke. I am actually drunk. To my surprise, being drunk actually makes me a better typer. Typist. Whatever.

I know where to begin: the beginning!

The movie opens with a fun sequence, but one expects a bit more excitement when sitting down to enjoy a comic-book movie. However, the stuttering start is easy to forgive as the film immediately treats the viewer to Christoph Waltz’s longest (if not, then close to his longest) scene, as well as a cameo sure to tickle more than a few movie-goers. The scene effectively sets the tone for the rest of the film and introduces the audience to the universe of The Green Hornet. By the time Seth Rogen makes his first appearance, it becomes clear that The Green Hornet is as funny as it is exciting.

Unfortunately, even though both the comedy and the action in the film provide a lot of fun and enjoyment, the balance of the two never seem quite right. The times in which one should fear for the characters, one laughs too much. Then again, this imbalanced approached to storytelling is perhaps preferable to other films in which one is constantly frightened at the possibility of seeing any character’s head explode in extreme close-up and gory detail at any given moment. In other words, I’d rather laugh through horror than hide my eyes through comedy.

The Green Hornet is the type of film that most viewers will have made up their mind about before ever setting foot in a theater. Unfortunately, it is not a good enough film to change the minds of those unwilling buddies, dragged along because everyone else wants to go, or unwilling girlfriends giving in to their excited partners because, let’s be honest, he/she did sit through Black Swan, even if there was that one scene to hold them over… in other words, if one thinks he or she will not like it, that is probably a correct assumption. The film will also have a hard time living up to the expectations of Seth Rogen fans and audience members hoping for the next crime-fighting movie to rival the first-installments of Ironman, Spiderman or the new Batman films.

Considering that he plays a part (apparently) originally meant for Nicholas Cage, it is extremely difficult to imagine anyone other than Christoph Waltz playing the part of Chudnofsky. One might criticize Waltz for being too likable as the movie’s villain (and to be fair, The Green Hornet does suffer from creating fear for the lives and well-being of the film’s heroes), but I was happy to take the performance for what it was and I enjoyed every minute of it.

On the other hand, it’s sadly easy to overlook the performance of Jay Chou. Honestly, I don’t know if he is a performer still learning English or if he was merely playing a character still learning English, but either way, he was genuine, convincing, hilarious, and extremely likable. For a relative unknown, he is trusted with delivering some of this movie’s best moments and he nails every one perfectly. I don’t mean to gush, but Mr. Chou has the look and charisma to be an absolutely huge Hollywood star, and not just in action movies.

Finally, we come to Seth Rogen. What can I say? He performs exactly as one would expect him to. He performs well, and, when needed, he is very funny. More importantly, he is convincing as the over-privileged son of a newspaper owner and he manages to hold his own as an action hero as well. There are moments throughout the film that, perhaps, one wishes he would ease off on the regular Seth Rogen act, but overall he delivers an adequate performance, even if it lacks the range to really put The Green Hornet over the top as a film.

Honestly, I thoroughly enjoyed the film and not once during the course of viewing it did I think, “Why did I see this again?” In basic terms, it was entertaining. The Green Hornet will provide you with a fair share of laughs and entertaining action moments. Still, the movie is not without its shortcomings. In some ways, it could have taken a few lessons from Kickass. Then again, in many ways, this is the film that Kickass should have been. All in all, I would say that The Green Hornet is the type of movie that almost anyone could like, but few will fully appreciate. Ultimately, it suffers from a less than perfect script only held up by stellar performances from every actor in the film.

Overall: The Green Hornet is a good film and easily worth the ticket price, but unless you’re sure you’ll like it, maybe wait for it to come to Netflix or OnDemand.